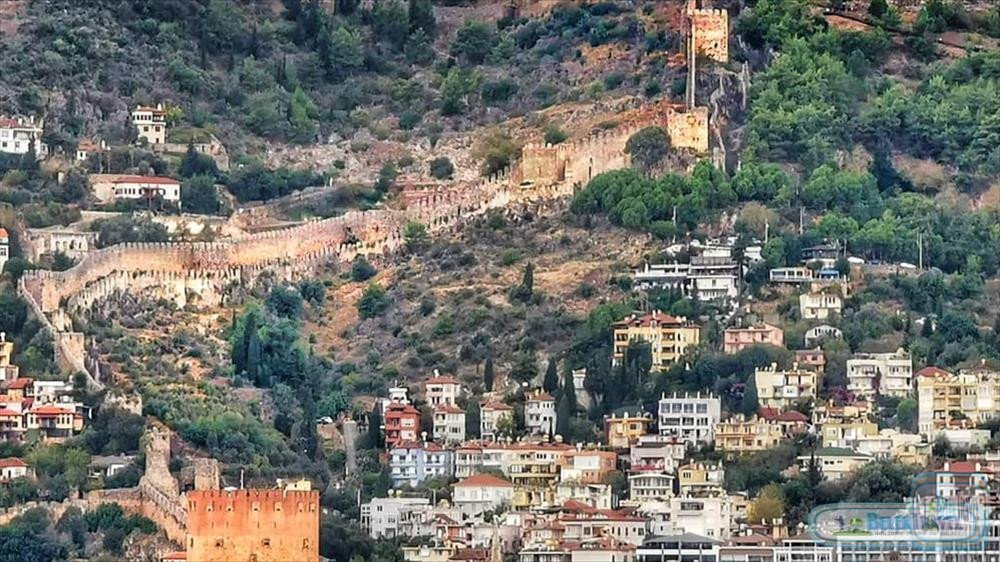 Surrounded by 6 km long walls and located on a peninsula of 10 hectares, Alanya Castle has been ruled by many civilizations such as Hellenistic, Roman, Byzantine, Anatolian Seljuks, Memluklus and Ottomans from the past to the present.

It is not known exactly who and how the first establishment was built. 4 BC. Alanya was mentioned for the first time in the century by the geographer Coracesium.

Because its natural defense is an easy and sheltered port, it has become an attractive place for pirates and used as a haven by pirates. If you take part in a boat tour in Alanya, you can see the cave of pirates. The Castle of Alanya, conquered by the Romans from pirates, ends pirate dominance. The castle was strengthened during the Roman period and in addition the walls were expanded.

The castle, which was conquered by the Anatolian Seljuk state in 1221, was re-strengthened and the red tower, Tophane, Inner castle, cisterns still existed today, giving alanya the brightest period. This beautiful city, named after Sultan Alaaddin Keykubat during the Seljuk period as Alaiye, continued as Alaiye until the history of the republic. After a visit by Mustafa Kemal Ataturk during the Republic, his name was changed to Alanya. With the shipyard built by Aladdin keykubat, the Seljuks, which have become a strong state at sea and on land, have made this a commercial city. With the construction of baths, mosques, cisterns, red towers, inner castles and many more, the castle is understood to be both strengthened and socially understanding. The mosque in the castle has become unusable, worn out over time. It was restored by Sultan Suleyman during the Ottoman Empire and was renamed Suleymaniye mosque.

The castle is open to traffic and it is possible to visit continuously And you can dine in a unique view of the restaurants in the castle. The red tower, the inner castle, and the shipyard are open to all from 09:00 to 17:00. You can also visit the damlatas cave in the part of the castle on cleopatra beach. This cave, which is beneficial to asthma patients, is open daily and open until 17:00. You can go to the castle with a new built cable car and have a pleasant time. Alanya is only 104 km away from the city of Belek.

Alanya can be described as paradise on Earth. People from all over the world are looking for a chance to buy a house in Alanya and live here.